Informer said KRIK planned to publish an article accusing Vucic of hiding his ownership of major assets in Belgrade through members of his family. 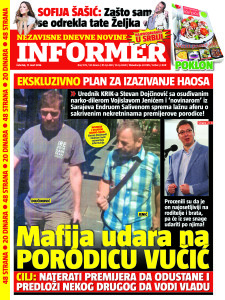 The claim was backed by a blurred photograph of KRIK’s leading journalist and details of the as yet unpublished investigative report.

Dojcinovic told BIRN that it was clear that someone was following journalists like him, as there was no other way Informer could have obtained such information.

“The most problematic things is that Informer had information that only someone who is systematically monitoring our work could have obtained,” he said. “The real question in Serbia today is who is monitoring journalists,” Dojcinovic added.

Informer put Dojcinovic on the front page with the title “The mafia strikes Vucic family” and the subheading – “Exclusive: How media-politics-tycoon racketeers are planning to destroy the State”.

Informer suggested that KRIK was inventing an alleged scandal in cooperation with “drug dealers, criminals, corrupt cops, but also agents of some of the foreign intelligence services” in order to force Vucic to give up the Prime Minister’s position in the next government.

The tabloid claims that Andrew Sullivan, chief of the Organized Crime and Corruption Reporting Project from Sarajevo, OCCRP, of which KRIK is part, is personally coordinating attacks on the Prime Minister.

The article calls on an unnamed source whom it called Dojcinovic’s “close associate”.

“Stevan has been insisting for some time that we – no matter how – dig up some dirt about Vucic’s family. Whenever we say that things are not as he imagines, he is raging and demanding results,” Informer’s unnamed source is quoted as saying.

The tabloid claims it obtained information from the Geodetic Authority, RGA, that KRIK sent an official request for information about the ownership of five apartments in February.

Dojcinovic says that the RGA, for the first time, did not want to give them the information they had asked for.

“When we asked why not, the RGA responded that they were ‘awaiting instructions’,” Dojcinovic said.

Dragan Vucicevic, editor of Informer, told BIRN that he would not reveal his sources for the article, denying that this type of labeling journalists jeopardized their safety.

“I will not tell you my sources. Do you think only you, BIRN and KRIK, have sources?. I’m not revealing anything…I don’t think I’m jeopardizing anyone’s life with this,” Vucicevic said.

The Independent Association of Journalists of Serbia, NUNS, on Thursday condemned what it called a “lynch campaign conducted by Informer against the portal Krik.rs” and said that the charges in the article did indeed endanger Dojcinovic’s safety.

NUNS urged the Ministry of Interior to investigate and inform the public about whether the information in this and other articles in Informer came from state authorities.

Informer’s attacks on KRIK have become routine since the investigative team started work in April 2015.

In November 2015, Informer published a series of articles accusing KRIK, the Centre for Investigative Journalism, CINS, and BIRN, of publishing “lies to destabilise the country.”

KRIK believes those attacks were directly linked to its publication of an investigation into properties allegedly owned by Belgrade Mayor Sinisa Mali and his role in handing state-owned land to his family-run business.

Informer has been called the voice of Prime Minister Vucic, because of its regular harsh attacks on the premier’s opponents and critics.

Editor Vucicevic has his own talk show on pro-government Pink TV which has hosted Vucic as a guest in numerous broadcasts.

Another case that raised concerns about whether journalists were being followed occurred on January 11, when NUNS filed criminal charges against Interior Minister
Nebojsa Stefanovic, saying that he was responsible for bugging its president, Vukasin Obradovic.

Obradovic questioned how the minister knew what was said in a private conversation he had with a police officer who has also filed a criminal charge against Stefanovic.