By Stevan Dojčinović and Bojana Pavlović

One day four years ago, in a traditional restaurant on Serbia’s Kopaonik mountain, two influential men held a meeting. One was from the world of politics, the other from organized crime.

Photographs obtained by KRIK, OCCRP’s member center in Serbia, set the scene: Andrej Vučić, the brother of President Aleksandar Vučić, sits across the table from Zvonko Veselinović, one of northern Kosovo’s most notorious underworld figures.

The meeting was also attended by three other men, only one of whom is visible in the photos. He could not be identified.

The photographs from the Salas 137 restaurant were recently submitted to KRIK by a reader who took them with a mobile phone in March 2015. The reader, who asked to remain anonymous out of fear of reprisals, said it was shocking to see Vučić with a widely known criminal figure. The urge to secretly capture the scene was irresistible, he said, though fear prevented him from revealing what he had seen until now.

The photos suggest a friendly atmosphere, and the man who took them said it looked like a gathering of friends: Vučić, Veselinović, and their companion were laughing, drinking, and watching Belgrade’s Red Star Basketball Club in a championship match on TV. 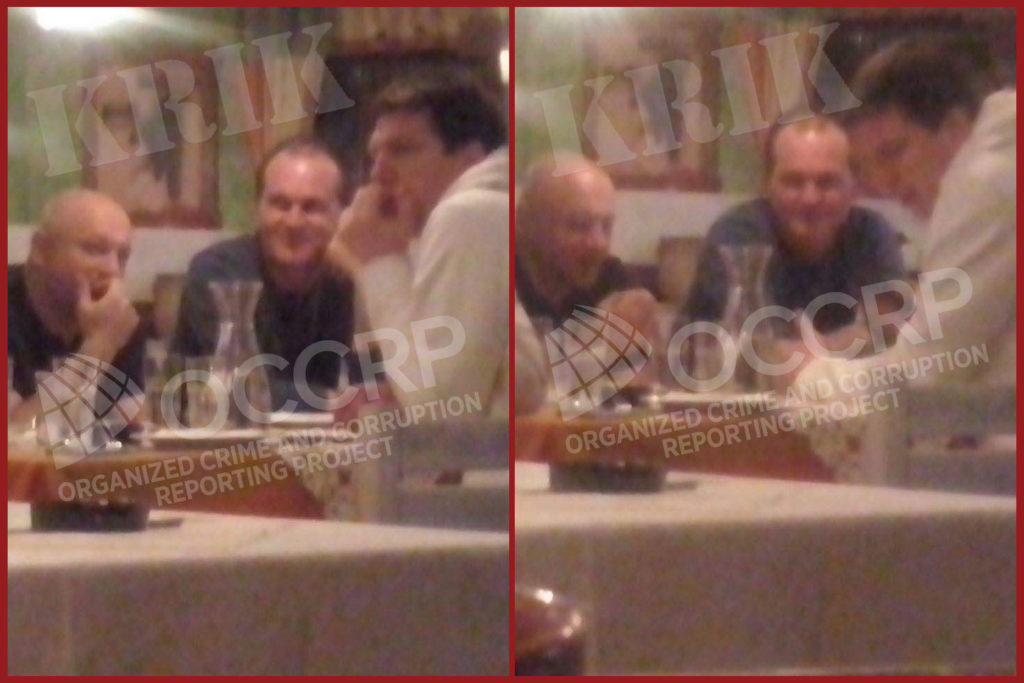 Photos sent in by a reader of Zvonko Veselinović (left) in a friendly restaurant meeting with Andrej Vučić (right). The identity of the man in the middle is unknown.

What brought them together remains a mystery, but the photos are significant because they reveal a friendly relationship between powerful representatives of two different universes — mainstream Serbian politics and northern Kosovo’s criminal underworld.

Police and intelligence reports obtained by KRIK describe Veselinović as a criminal involved in loan sharking, money laundering, and drug and oil smuggling. Though charged many times in Serbia, he has only once been convicted — for illegal sand and gravel mining. And while he is feared by many, Veselinović also enjoys a measure of public support in northern Kosovo because of his perceived role as a nationalist fighter for local Serbs in their conflict with Kosovar Albanians.

The man on the other side of the table, Andrej Vučić, is also an important figure. Much more than just the brother of Serbia’s president, he plays a shadowy role in the country’s political life. He holds no official position, yet has outsized influence in the governing Serbian Progressive Party (SNS). One minister calls him the president’s éminence grise — a behind-the-scenes adviser who quietly wields great power.

Amid gunshots, car fires, and assassinations in the Kosovo town of Kosovska Mitrovica, local Serbs have learned to play it safe, mind their own business, and avoid discussing powerful people in public.

Zvonko Veselinović is a name they take special care not to mention. Though he has presented himself in the media as a legitimate businessman in transport and construction, Serbian police and intelligence reports paint a different picture: That of a long-time underworld leader with influence in all Serb-majority towns in the region.

His name first appears in the White Book of Organized Crime, a Serbian police document that was leaked to the public in the early 2000s. Veselinović was described as the alleged leader of a group “stealing motor vehicles in ​​Kosovska Mitrovica and smuggling them from the southern [Albanian] to the northern [Serbian] part of the town, operating also in Pristina and cities in Serbia.”

The gang’s other lines of business, the police said, included extortion and document forgery.

Over the following decade, Veselinović expanded his business and power, according to a March 2011 report by Serbia’s Security Information Agency signed by its former director Saša Vukadinović.

The intelligence file, which KRIK reporters found among court documents, describes Veselinović as the leader of a group that trafficked drugs, smuggled weapons and oil, engaged in loan sharking and money laundering. He was said to have well-established ties not only in Kosovo’s Serbian community but also with some groups in Serbia itself — and with prominent Kosovo Albanian criminals.

“In the field of drug trafficking, Zvonko Veselinović works closely with Ismet Osmani and Mentor Beciri (Mentor Beqiri) from the [Albanian] part of Kosovska Mitrovica, leaders of a criminal organization involved in internationally organized drug trafficking channels,” it reads.

According to the report, Veselinović’s group buys drugs from Osmani and smuggles them to Serbia while selling weapons through the Albanians in the opposite direction.

In a 2005 report by Germany’s Federal Intelligence Service that was published by WikiLeaks, Osmani is alleged to be involved in smuggling fuel, cigarettes, and drugs.

“(He) is considered a particularly dangerous individual,” the report read. 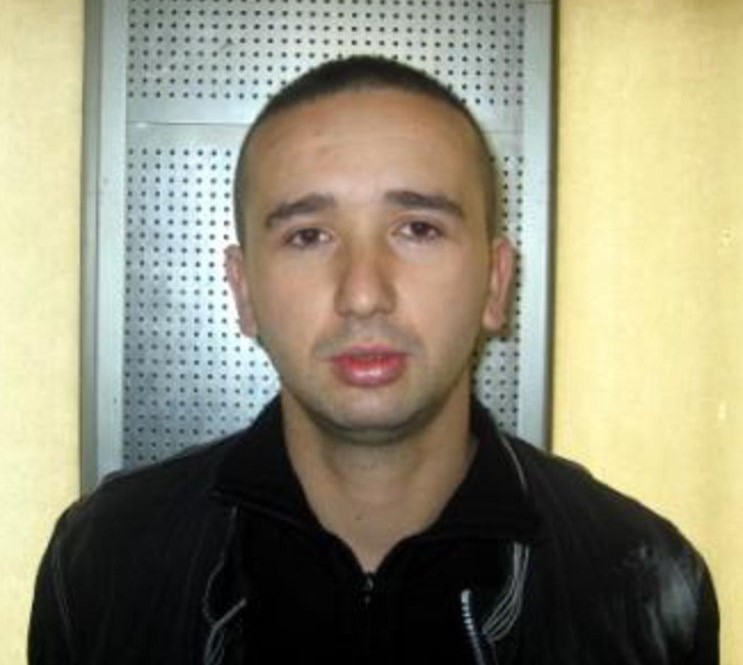 Both reports describe Osmani and Beciri as important players in Kosovo’s criminal underworld.

Veselinović’s other associates, according to the Serbian intelligence report, include Enver Sekirača, a Kosovo-based organized crime figure convicted of ordering the murder of a policeman in 2007, and Goran Obradovic Susa, the Serbian leader of a drug smuggling group whose 2014 murder remains unsolved.

Serbian law enforcement has made many attempts to prosecute Veselinović, with little success.

He and two associates were accused of stealing a Mercedes in the southern Serbian town of Novi Pazar in 2000. Prosecutors later dropped the charges with no clear explanation.

A Partner At Large
Veselinović’s right-hand man, Milan Radoičić, is suspected by prosecutors in Kosovo of involvement in last year’s assassination of Oliver Ivanović, a political leader who spoke out about strong ties between criminals and local politicians. A warrant was issued for Radoičić’s arrest, but he remains at large.

In 2003, Veselinović was arrested in Serbia and accused of smuggling three kilograms of heroin from Kosovo by car. The police said that he admitted to carrying a plastic bag for another man during interrogation, saying, “I did it because I was blinded by the amount [of money] I was promised.”

But in court he professed his innocence and claimed he had been beaten in police custody. He was acquitted in 2005.

He was later tried for his alleged involvement in a 2011 truck theft scheme. According to the indictment, his group borrowed from a bank in Serbia to buy 32 trucks, then took the vehicles to Kosovo and never repaid the bank. Once again he was acquitted, though a business partner whose name was on the paperwork was convicted.

The only time Veselinović was ever convicted of a crime involved illegally quarrying sand and gravel in southern Serbia. The materials went to an associate whose company built the cross-Serbia highway known as “Corridor X.” Veselinović was convicted for financing the operation and was sentenced this January to two years in prison, though he can still appeal the verdict.

Veselinović’s ability to gain support in northern Kosovo despite his criminal reputation is linked to his role in the ethnic conflict in the divided town of Kosovska Mitrovica.

At age 18, Veselinović allegedly joined the “Bridge Watchers,” a vigilante group formed in the town’s Serbian areas at the end of the Kosovo war in 1999.

The Serbian army and the police had withdrawn from Kosovo, which had declared independence from Serbia, but many Kosovo Serbs refused to recognize the country’s independence. They organized to resist what they saw as Albanian influence over Serbian territory.

Members of the group gathered on a bridge over the river Ibar, which divides Kosovska Mitrovica’s Serbian and Albanian neighborhoods, to restrict entry to Serbian areas.

In July 2011, when Kosovo police tried to take control of local border crossings with Serbia, locals put up barricades and burned customs facilities. One police officer was killed in clashes that lasted several days.

Kosovo authorities identified Veselinović as the instigator of the border fight, which prompted praise from Aleksandar Vučić, then not yet Serbia’s president but already a leading opposition politician.

“Veselinović may not be a nice guy from neighborhood,” Vučić said at the time, “but he is a man who gives everything that he has for the liberty of Serbs in Kosovo.”

In a 2016 interview with KRIK, Vučić denied having any ties to Veselinović.

“I gave him political support when I was in the opposition,” he said. “My support was for his involvement with barricades, not for his business.”

“I saw Zvonko Veselinović only once in my life. I saw him in Kosovo. It was in 2009. I heard that he once attended the same wedding that I did. But I did not see him,” Vučić said, insisting that neither he nor his party supports the alleged organized crime boss. When asked about any connection between Veselinović and his brother, the president said he knew nothing, saying he would have to “ask him about it.”

Reached by reporters, Veselinović first said he “may have” met the president’s brother years ago, then denied ever meeting him at all. “I have no contact with that gentleman,” he said. “If anyone claims to see me with him, they’re lying.” 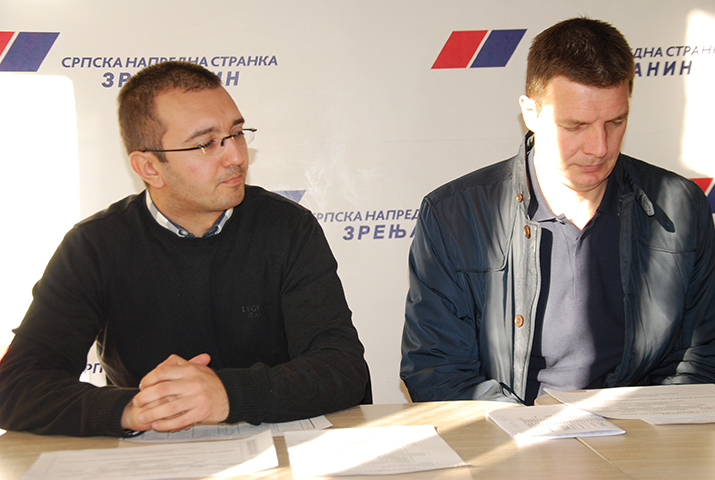 Though President Vučić describes his brother as a modest man who works for Serbia’s National Bank and struggles to repay his apartment loan, he is in fact a powerful individual who plays an important role in the country’s political life.

Andrej Vučić is active in the Serbian Progressive Party (SNS), often visiting its local branches and meeting local leaders. He is often seen in the company of Miloš Vučević, the mayor of Serbia’s second-largest city, Novi Sad.

In a 2015 letter addressed to Joseph Biden, then Vice President of the United States, five members of U.S. congress expressed concern that Andrej Vučić and two friends had “consolidated their influence and interest in energy, telecommunications, infrastructure and all major business in Serbia.”

“He has the most influential position in the country — the position of the prime minister’s brother,” said Milan Stamatovic, mayor of the town of Čajetina, to the newspaper Danas.

But the clearest indication of Andrej’s influence was provided by Siniša Mali, Serbia’s minister of finance and one of Vučić’s closest associates, in a 2014 interview for the Croatian weekly Globus.

In the interview, Mali attributed his appointment as mayor of Belgrade that year to Andrej’s recommendation. “Vučić’s brother Andrej and my younger brother Predrag are best friends,” Mali explained.

He was unequivocal about Andrej’s influence in the political world. “Andrej is Aleksandar’s ‘grey eminence’ in the SNS, and never appears in public,” Mali said.