Serbian businessman Vladimir Delić, who was involved in the 2004 privatization of a railroad parts company along with Belgrade Mayor Siniša Mali and his father, has opened an offshore company in the United Arab Emirates (UAE).

Delić, who left Serbia in 2009, used a UAE company to buy an international shipping company, according to documents recently reviewed by OCCRP partner KRIK.

Details about these transactions are buried in the Panama Papers, a trove of internal data of Mossack Fonseca, a Panamanian legal firm doing business in offshore tax havens for clients who want to hide their identities and/or holdings.

The data was obtained by the German newspaper Süddeutsche Zeitung and shared by the International Consortium of Investigative Journalists with the Organized Crime and Corruption Reporting Project and more than 100 media partners from 76 countries, including Serbia’s KRIK.

In a telephone interview, Delić told KRIK that he does own the offshores, but said they are not related to Mali. In addition, he denied any wrongdoing in connection with the privatization of Bratstvo, a railroad parts company, that was started by Mali when he was at the privatization agency. Delić said he invested money he had earned previously in his new shipping business.

Mali has declined to be interviewed by KRIK reporters.

Prior to leaving the country, Delić had a long history in Serbia, including the privatization of Bratstvo, the railroad parts company based in the northern Serbian city of Subotica.

His partner in that deal was Mali’s father, Borislav. Just before the sale, Mali had worked as the director of the Center for Tenders in the Agency for Privatization.

As KRIK/OCCRP reported earlier, a review by a state agency found Mali used insider information from his agency job to edge out foreign competition and help Delić and his father privatize the factory. After the sale, Delić appointed Mali to the Bratstvo board of directors.

Over the next few years, workers claim that the partners mismanaged the company and drained money from it, eventually leading to its collapse. After it ran into financial trouble, Delić returned his 51 percent ownership to the state.

In 2010, a year after Delić left Serbia, prosecutors launched an investigation into his activities in connection with the Bratstvo privatization.

The country’s Privatization Agency asked the prosecutor’s office in Subotica to investigate Delić for criminal acts connected with Bratstvo. Its assets had been mortgaged to cover loans worth € 3.7 million from two banks to Delić’s Belgrade-based company Unibros, which in turn was owned by a company with the same name in Cyprus which was co-owned by Delić’s wife.

The loans were never repaid and the bank seized Bratstvo’s assets.

Delić returned his shares to the state and moved to Cyprus. Last year, after a long investigation, the prosecutor’s office in Subotica declined to prosecute. They gave no explanation as to why.

Nothing was known about Delić’s business activities after he left Serbia, until new details emerged in the Panama Papers. 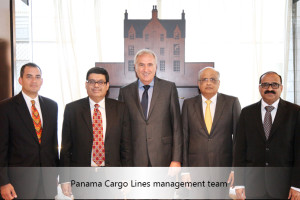 The documents reveal that in 2013, Delić moved to Dubai where he established two Dubai-based companies. Through one of these he purchased a Panamanian company that became Panama Cargo Lines Ltd., an international shipping company.

At the time Delić was setting up in Dubai, Mali was the chief state negotiator with the UAE on the privatization of the Serbian state airline company (then called Jat Airways but today named Air Serbia) and the construction project Belgrade Waterfront. Reporters for KRIK found no connection between investors from the Emirates and Delić’s company.

Our man in Dubai

E-mails exchanged between Delić’s lawyers and Mossack Fonseca agents show that two years ago, Delić relocated from Cyprus to the Emirates, an offshore jurisdiction where business ownership is not public information. The e-mails show that Delić was behind two UAE companies.

In mid-October 2014, a lawyer from the Emirates notified Mossack Fonseca that he represented Delić and said his client wanted to buy a Panama-based international shipping company. In February of 2015, working through Delić’s Dubai-registered VD Holdings Ltd., he bought the Panama-based Julesdale Inc. and changed its name to Panama Cargo Lines Ltd.

According to the documents, VD Holdings Ltd. was established on Feb. 17, just three days before taking over what became Panama Cargo.

Delić developed his business rapidly. Today, Panama Cargo mainly ships goods from Kuwait to China and controls more than three thousand containers to do so. It has offices in Panama, Singapore and Dubai.

The Panama Cargo office in Dubai was inaugurated by Eduardo Fonseca Ward, the son of one of the founders of Mossack Fonseca, who is also the Consul General of The Republic of Panama in Dubai.

The Mossack Fonseca emails show that Delić owns one more company in Dubai called Resource Trading, but its purpose is not listed.

The Panama Papers e-mails show that Delić sent Mossack Fonseca a polished biography with a few notable omissions. By law the Panamanian agency must check out its clients, in theory to prevent questionable people from opening offshore companies.

Delić described himself as a successful businessman and manager who studied economics and maritime transport in Croatia and began his career in the 1980s in Yugoimport, a state-owned company in the former Yugoslavia, before going on to another state company, Generalexport (Genex).

Then he says he established the Unibros Steel company in Cyprus. This company claims to operate successfully in 37 countries with hundreds of employees, and in 1994 and 1995, while Serbia was under sanctions, it achieved a turnover of US$ 500 million.

Delić said in his biography that he was the manager of Bratstvo in Subotica from 2004 to 2009. The bio doesn’t mention that Bratstvo was bankrupted, or detail the connections between the company and Delić and Mali’s family, or note that Delić himself was under investigation at the time he sent his biography.

At first he was upset and only spoke briefly with reporters. A few hours later, he called the newsroom back and calmly answered questions.

The journalists confirmed the information from leaked documents and e-mails. He said he owns both companies from Dubai and that one, through the Panamanian company, is engaged in overseas shipping. He said the second, Resource Trading, trades steel.

“I opened a company in Dubai because I believe that this is a good place to do business. I live between Dubai and Cyprus,” Delić said. He said it is normal to do business through offshore companies in the Emirates, Panama and Cyprus.

“It’s all business. There are thousands companies in Panama like mine. When I opened the Panamanian company, many famous people around the world came there, the Panamanian Consul was there too,” Delić said, explaining that he invested money he earned during his long career as a businessman in the shipping venture.

He said Mali and his family have nothing to do with his activities in the Emirates and described them as great friends. “I have known (Borislav) Mali for 28 years. We are very good friends. I knew Siniša while he was studying. He is a capable guy. Siniša did not help me to buy Bratstvo,” Delić said.

He denied any wrongdoing in the Bratstvo privatization.

“It has nothing to do with it and it is ridiculous to me. If you find one US dollar that went from Bratstvo to Cyprus, I am ready to go right to jail,” Delić said.

He claims he actually suffered losses in the privatization, blaming the “Hungarian lobby,” government officials, and the state-owned company Serbian Railways for working against him.

“I’m a very successful businessman who came to Serbia, had invested money and immediately fell into the mud. I got out of that mud by returning the factory,” Delić said.

Mali, like Delić, has extensive experience in setting up offshore companies.

The two companies authorized Mali to buy luxury apartments on behalf of companies on the Bulgarian coast in 2012 and 2013. The third company illegally obtained 10 hectares of state owned land in Vršac by Mali. The purpose of the fourth company could not be determined.

Three of these companies are registered at Trident Trust and the fourth at Morgan and Morgan, both global services firms that handle offshore companies. No data about them was found in Mossack Fonseca’s Panama Papers.