Russian spies and diplomats have been involved in a nearly decade-long effort to spread propaganda and provoke discord in Macedonia as part of a region-wide endeavor to stop Balkan countries from joining NATO. This conclusion comes from a tranche of intelligence documents obtained by the Organized Crime and Corruption Reporting Project (OCCRP) and partners NOVA TV and the Crime and Corruption Reporting Network (KRIK).

The documents – a collection of reports by Macedonian counterintelligence – also describe efforts by Serbian intelligence to support anti-Western and pro-Russian nationalists in Macedonia. 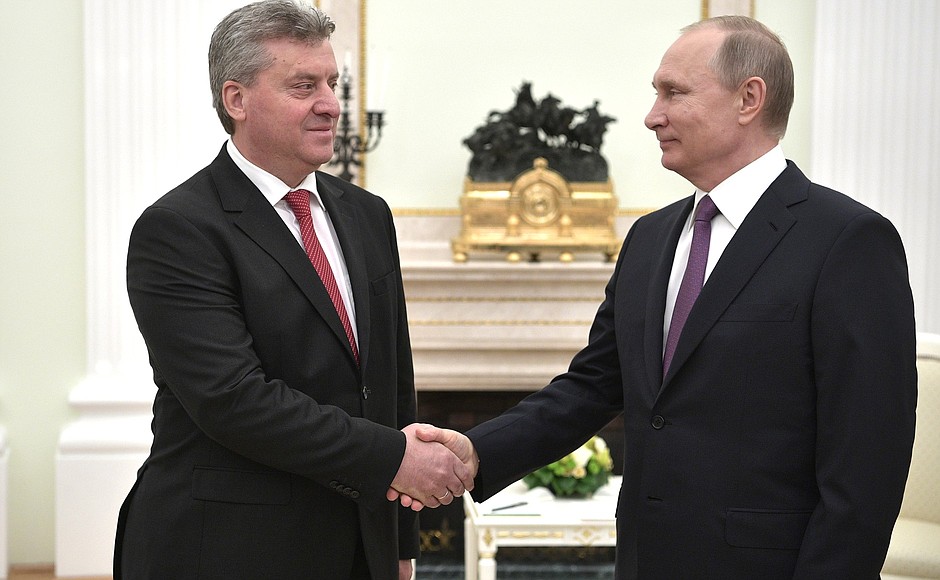 The documents provide one of the clearest views yet of Russia’s ongoing efforts to increase its influence in the former Yugoslavia and pry the region away from the West. In April, Montenegro’s parliament voted to become the newest member of NATO. Macedonia and Bosnia and Herzegovina are also seeking to join, and even Serbia has deepened ties with the defense pact despite many Serbs’ deep resentment of the transatlantic alliance after its airstrikes against the country in 1999.

The Russian and Serbian efforts have contributed to a complex political crisis in the country, which is riven by deep divisions between its mainstream political parties and tensions with its restive Albanian minority. Ethnic Albanians make up about a quarter of the population and their demands for autonomy have previously led the country to the brink of civil war.

For the last nine years, Macedonia has been “undergoing strong subversive propaganda and intelligence activity implemented through the Embassy of the RF (Russian Federation),” according to a briefing prepared earlier this year for Vladimir Atanasovski, director of the Macedonian Administration for Security and Counterintelligence (UBK). The start of the Russian operations coincides with a setback in 2008 in Macedonia’s efforts to join NATO, when Greece vetoed its bid based on an ongoing dispute over the use of the country’s name.

The document says: “By using the assets and methods of so-called ‘soft power,’ as part of the strategy of the RF in the Balkans, the goal is to isolate the country [Macedonia] from the influence of the ‘West’.”

“Moreover, Russian foreign policy is in tight correlation with an energy strategy whose goal is to control strategic energy resources through partnership with the Balkan countries.” According to the document, the goal of the Russian strategy is to place Macedonia “in a state of exclusive dependency on Russian policy.”

The Russian intelligence activities have been conducted from their embassy in Skopje by three agents of Russia’s Foreign Intelligence Service (SVR), overseen by a station in the Serbian capital Belgrade, as well as four agents of the military Main Intelligence Agency (GRU), coordinated from Sofia, Bulgaria, the document alleges. Also said to be involved are local representatives of state news agency TASS and a representative of Rossotrudnichestvo, a Russian government aid agency that, according to the Washington Post, has previously been investigated by the FBI for attempting to recruit intelligence assets in the United States.

Russian agents have worked to recruit former and current members of Macedonia’s army and interior ministry in order to create a “critical mass of military trained persons,” the document says, that “at a certain political moment or situation are to be used for accomplishing Russian interests.” The document does not say whether these attempts have been successful.

Russian agents have also attempted to influence and offer funds to Macedonian media outlets, including those aimed at the country’s Albanian minority, in order to spread “information and disinformation” in support of Russian policy goals, it says.

Although Macedonia has been a partner of the West since becoming independent from Yugoslavia in the early 1990s, Russia has increased its influence in the country in recent years. For example, honorary consulates established in the towns of Bitola and Ohrid function as “intelligence bases,” the document says, without providing further details.

Russia has also eyed Macedonia for its European gas pipelines. The Russian company Stroytransgaz began construction of a pipeline network in the country in 2015. The cost of the initial $75.7 million section, completed last year, was largely covered by Russia’s repayment to Macedonia of the more than $60 million in debt it had inherited from the Soviet Union.

Russia has also drastically increased its cultural outreach in the country, pushing an idea of “pan-Slavic” identity and shared Orthodox Christian faith, the UMK document says.

Russia’s embassy has overseen the creation roughly 30 Macedonia-Russia “friendship associations” in the country, the document says, as well as opening a Russian cultural center in Skopje and sponsoring the construction of Orthodox crosses and Russian-style churches across the country.

Russia’s efforts appear to be having some effect. For example, the Macedonian government refused to join Western sanctions on Russia over its 2014 military intervention in Ukraine, citing the cost to its economy. 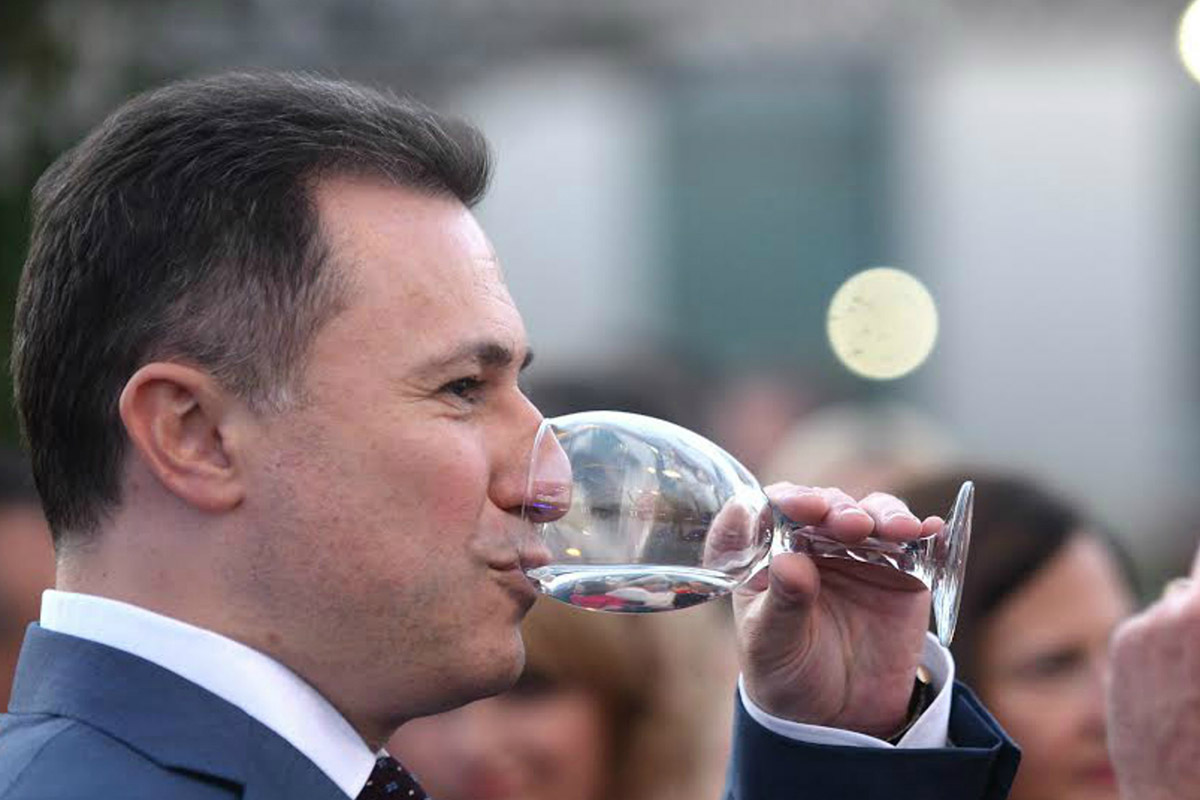 In Macedonian politics, Russia’s approach has been nakedly partisan. The Kremlin has been a vociferous public supporter of VMRO-DPMNE, the nationalist former governing party of Nikola Gruevski, who stepped down as prime minister following a political crisis in 2015. The crisis was sparked by the release of information pointing to his party’s alleged illegal wiretapping of tens of thousands of Macedonian citizens.

Following a December election that resulted in a hung parliament, opposition Social Democrats leader Zoran Zaev finally formed a coalition government with two Albanian parties on May 31. The interim period was turbulent. On April 27, nationalist protesters stormed the parliament, assaulting Zaev and dozens of others. The collection of documents obtained by OCCRP and partners show at least one Serbian intelligence agent was present during the attack.

Gruevski and other senior VMRO figures are currently under investigation by a special prosecutor for charges that include abuse of office and money laundering. Besides Russian backing, Gruevski’s party has recently earned support from right-wing US media and congressmen, who have publicly stated that his opponents have been backed by billionaire philanthropist George Soros – a man vilified by both Russia and the Western far-right.

Russia has criticized Macedonia’s December election as marred by interference by the US and the European Union (EU), whom they have accused of supporting Zaev and a “Greater Albania” project to dismember the Balkan states.

In a separate document detailing an April 7 meeting between senior Macedonian foreign ministry official Nenad Kolev and Russian Ambassador Oleg Shcherbak, the ambassador is recounted as having said that Russia’s aim was to “create a strip of militarily neutral countries” in the Balkans comprising Montenegro, Bosnia and Herzegovina, Macedonia, and Serbia.

Shcherbak expressed frustration that Macedonian officials had not reciprocated Russia’s full-throated public backing in the face of “foreign interference,” and implied that the countries’ economic and diplomatic ties could be adversely affected if officials did not start supporting Kremlin policies, according to the document. Three Macedonian foreign ministry officials, who declined to be named because they were not authorized to speak to the media, separately confirmed the April 7 meeting took place, but did not confirm its content.

Russian foreign ministry officials did not respond to written questions.

Prime Minister Zaev declined to comment, but he referred OCCRP and partners to comments remarks he made in April warning of increased Russian influence in Macedonia.

“I believe that if no additional measures are undertaken, in regard to the low interest of the EU and the USA in this region, the Russian Federation will have more space to impose its own interests,” he said at the time.

The allegations made in the tranche of intelligence documents are not limited to Russian influence. The collection also contains wiretaps and other surveillance showing an effort by Serbia’s Security Information Agency (BIA) to bolster nationalists in Macedonia. Serbia’s populist Prime Minister Aleksandar Vučić has avoided publicly taking sides in Macedonia’s crisis, but much of Serbia’s pro-government media have been strong backers of Gruevski and Russia. Serbia and Russia share deep cultural and religious ties and work together at times, although the government often plays the Americans and Russians off each other. 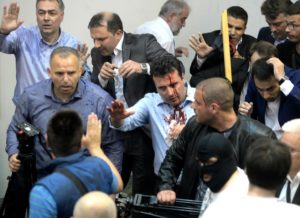 The documents show that Macedonian counterintelligence agents have been monitoring a BIA operative and embassy official in Skopje, Goran Živaljević, who, according to one assessment, has since 2015 worked to push back against the country’s integration with Europe.

The documents show Živaljević giving instructions to Ivan Stoilković, a pro-Russian Macedonian MP, who is the leader of a VMRO coalition partner, the Democratic Party of Serbs in Macedonia. Živaljević frequently met Stoilković “when making important decisions in the assembly or before meetings of the government,” according to one document.

Stoilković was observed to be in contact with Russian diplomats and TASS correspondents in Skopje, according to one document, which did not provide further details. He was among a number of Balkan politicians who traveled to Moscow last year to sign a declaration calling for the region to be “militarily neutral,” a position that would preclude an agreement with NATO.

Stoilković also met politicians and activists from nearby Montenegro who are opposed to that country joining NATO. They included Marko Milačić, an activist who Macedonian intelligence believes had previously met with a Russian diplomat working for military intelligence in Podgorica, the Montenegrin capital.

Milačić confirmed that he had met separately with Stoilković and Russian diplomats, but there was nothing untoward about the meetings.

“What the Macedonian secret service is doing is part of broader propaganda,” he said, referring to the documents obtained by OCCRP and partners. “It’s obviously purely politically motivated in order to consolidate political power in Macedonia.”

Agents from Macedonia’s UBK tracked Živaljević around Skopje on April 27, including inside the parliament, as pro-VMRO demonstrators beat lawmakers. A photo obtained by UBK – and published by NOVA TV – shows Živaljević in the foreground as the melee unfolds behind him.

“Živaljević is the official representative of BIA in Macedonia, he is not there illegally,” Dačić said.

When questioned by a NOVA TV reporter, Stoilković, the Macedonian politician, refused to discuss his contacts with BIA.

“When you meet someone, do I ask you about that? Did I ever ask you about your communications and the people you communicate with? Shame on you,” he said. “You’re insulting me.”

According to the intelligence documents, both men were also caught on tape coordinating anti-Zaev propaganda in neighboring Serbia, where the media have carried a steady stream of stories warning that Western meddling and Albanian political claims could lead to war. 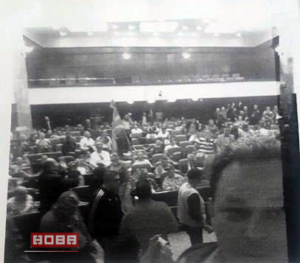 Živaljević in the Macedonian Parliament during violent events

A series of wiretap transcripts starting on March 3 show Živaljević and Stoilković arranging a meeting between Gruevski and Miroslav Lazanski, a pro-Vučić lawmaker and one of Serbia’s most influential media commentators. The transcript also shows Stoilković telling Živaljević that he “briefed (Lazanski) on the column he needs to write.”

The resulting column by Lazanski in Serbian newspaper Politika on March 5 denounced Zaev and echoed VMRO’s calls for new elections. That evening, Živaljević and Stoilković spoke again to celebrate their success.

“I spoke to Lazanski earlier. He said the article reached record readership for Serbia,” Stoilković told the BIA agent.

For Macedonian intelligence, this was the tip of the iceberg. A separate document obtained by OCCRP and partners listed over 50 examples of commentary by Lazanski, including articles and appearances opposing Macedonian NATO membership, praising Russian military power, and blaming the West for fomenting unrest in Macedonia.

When asked about this, Lazanski denied he was working on behalf of intelligence services.

“I’m neither with the service nor a spokesman for the service,” Lazanski said. “I was not down there as a (parliamentary) deputy, but as a journalist.”

“My habit is that when I come to a foreign country, I call our embassy. Mr. Živaljević is a duly and legally accredited representative of our BIA in Skopje.”