Soon after Ivica Tončev, a low-profile businessman turned politician, moved from Austria to Serbia about five years ago, he quickly established himself as one of the more influential people in the country.  Today he is an advisor for national security to the Prime Minister and Interior Minister Ivica Dačić, President of the Socialist Party of Serbia (SPS).

But that doesn’t really reflect Tončev’s true power. Tončev is on the board that manages the finances of SPS – usually one of the most sensitive positions in Serbian politics.  The position is often reserved for important insiders who can effectively manage the murky world of party financing.

Before resigning recently, he was also a member of the Parliament of Serbia and of two parliamentary committees: the Committee on the Diaspora and Serbs in the Region and the Committee on the Economy, Regional Development, Trade, Tourism and Energy. The anti-corruption agency asked him to resign from either parliament or from the advisor position, because holding two positions in different branches of government represented a conflict of interest.  He chose to resign from parliament.

He was recently named to the prestigious post of a vice president of the once proud Red Star Belgrade football club, a state owned club that is near bankruptcy after years of being a being plundered by political and mafia interests.

But while Tončev is now an important and connected member of Serbia’s political elite, in his private life he has also been connected to important people. Tončev has been in long-time business relations with an influential organized crime figure.

According to research of the Organized Crime and Corruption Reporting Project (OCCRP) and the Center for Investigative Journalism in Serbia (CINS), Tončev managed a company owned by Branislav Šaranović, a secretive but influential crime figure from Montenegro who was assassinated in Belgrade in 2009. Tončev sold his Vienna based company Tončev GmbH to Šaranović in 2006 and then continued to serve as manager of Šaranović’s company. Even after Šaranović was assassinated, Tončev continued to manage the company’s Representative Office in Belgrade and officially does so today.

The connection raises serious questions about the influence of organized crime in Serbian politics.  Previous OCCRP/CINS stories showed that SPS’s headquarters building was the site of a night club that the Šarić brothers had an interest in.

Details of the Tončev business in Austria before he came to Belgrade have never before been known to the public.  While Tončev cultivates the image of a successful businessman, it is not clear where he got his money, his education and other basic information usually well known for such a powerful person.

What is known is that in September of 2003 in Vienna, Tončev signed a contract for establishing the firm I.S.K. Immobilien-Bau-Handels GmbH. His partner was Skender Januzi, an ethnic Albanian businessman, according to documents filed in the archives of the Austrian business registry. Together they invested €35,000 and appointed Januzi’s wife Edith as manager. 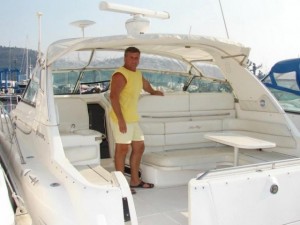 The Januzi’s also own the firm Januzi GmbH, a real estate and property development firm according to their website. OCCRP could find little else about this family.

Skender Januzi confirmed for CINS and OCCRP that he established a company with Tončev and that they are good friends. “I knew him over twenty years. Then we started the company,” he said.

Januzi declined to answer questions about their joint venture, but he had only words of praise about Tončev.

Vienna, the capital of Austria, has historically been a major destination country for Yugoslavian immigrants in Europe. Immigrants from the region have been going to Austria for decades in search of work.  This wave intensified during the Balkan wars of the 90s. Some estimates say there are more than 120,000 Serbian immigrants live in Vienna alone.

But the cooperation between Tončev and Januzi did not last long. The Januzi’s left the company in January 2004, less than four months after it was founded.

“We wanted to work on a big construction project, but we didn’t get the job and we (Januzi and his wife) didn’t want to be in that company,” Januzi said.
Tončev took over management and ownership and the company name was changed to Tončev GmbH. It is not clear what business Tončev engaged in.

Two and a half years later, Tončev joined in partnership with Šaranović, the controversial Montenegrin casino owner.

Šaranović, who more than a half dozen police, crime figures and journalists have described as a mafia Don, had a prior history of criminal activity going back to the 1980s and has been associated with members of other criminal groups.

According to German prison records and media, Šaranović was arrested in Germany on charges of extortion and sentenced to eight and a half years in prison. An article in the German magazine Der Spiegel at the time said Šaranović was sent to prison to serve his sentence but managed to escape in spectacular fashion by blowing open a steel prison door. German authorities confirmed the information.

OCCRP and CINS reporters also found Šaranović’s name in police records of the “America” group, a crime gang involved for a decade in international drug smuggling. A 2001 police document based on testimony by an “America” group member code named Srećko told of how gang leader Voja Rajičević, also called Voja American,  was a friend of Šaranović. Srećko described a day when members of the group visited a casino owned by Šaranović in Belgrade’s Slavija Hotel, where they ”left their weapons”. Srećko was killed two years after he gave testimony.

Šaranović was well known to police but did not have extensive criminal activity in later years.  He owned legitimate businesses including casinos and kept a low profile. Police and other sources familiar with criminal practices described him as a respected, mafia Don-like figure who gave advice and made connections for crime groups who sought him out.

However, his ties caught up to him. Šaranović was murdered gangland style in October 2009 outside his home by machine gun toting assailants.  His murder remains unsolved.  His brother Slobodan, who has long defended his brother’s name, offered ”a six digit reward in euros” to anyone who provided him the name of the person who ordered the hit and promising them anonymity and no retribution.

Šaranović built a network of businesses in Serbia and Austria more than a decade after his escape from Germany.

In 2001, he bought G.P. Stib Holding from another company in Kinshasa, capital of the Democratic Republic of Congo. Its owner was the controversial Montenegrin businessman George Jablan and the company operated “Playboy” casino in Kinshasa and another casino in Belgrade based in the Hotel Jugoslavia. Jablan, a suspected crime figure, was later murdered in the late 1990s in the Czech Republic.

In Serbia, Šaranović owned the company Fil-Sar which ran three casinos – in Belgrade, Kruševac and Aleksandrovac.  Operating casinos in Serbia is a very difficult business and the only owners tend to be large international companies, criminals or strong businessmen with reputations fearsome enough to keep organized crime groups at bay.

In 2006, he bought Tončev’s company in Vienna and changed the name to Fil-Sar.

Branislav Saranovic’s brother appealed in this flyer for people to provide him information on this brother’s murderers.

According to paperwork filed with the founding of the representative office in Belgrade, Fil-Sar has three employees and does market research in Serbia and to be an intermediary between the Vienna office and Serbian businesses.

It is not clear what type of business Tončev sold to Šaranović in the first place.

Although it was registered as a construction company, reporters of OCCRP and CINS couldn’t find any evidence that the business ever operated.

The company was headquartered over its life in four different locations around Vienna, according to business and land records. OCCRP and CINS could find no evidence that the company’s office ever existed.

Reporters tracked down the first headquarters of the company Tončev and Januzi founded.  It was located in a run-down building owned by Januzi’s company on Gudrunstrasse Street in Vienna, a neighborhood mainly populated by Turks and Yugoslavs. As they entered Tončev’s former offices, they found themselves in a dark storage area on the first floor filled with cages loaded with stored belongings. Neighbors told reporters that they were unaware than any company ever operated there.

When Januzi left the partnership, Tončev moved the company headquarters to an apartment he owned across town.

The company again changed address when Tončev entered into a partnership with Šaranović and one more time after that. Both of these headquarters locations were rental apartments owned by Austrians and rented to “a Yugoslav person” neighbors said.  They were not aware that any company was ever at the address. 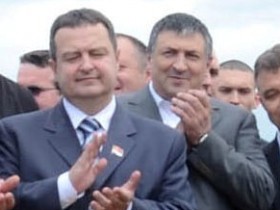 Journalists of OCCRP and CINS collected financial statements of Fil-Sar for 2005 onwards.  They report no revenues and have small assets. OCCRP and CINS reporters did a thorough Internet and database search and could not find any business activity over a seven year period.

However, Fil-Sar does show up in Serbian records as related to the casino in the Slavija Hotel, one of the most famous casinos in Belgrade, which is owned by the local Šaranović company.

Documents which were collected in Belgrade’s Commercial Court show that the Vienna based Fil-Sar sued Serbia and Slavija Hotel in 2008 because the hotel failed to obtain all the necessary licenses to operate the casino.

Court records show that the company Fil-Sar entered into a partnership to run the casino and that Fil-Sar bought equipment for the casino in Belgrade and invested another $300,000 as a security to insure funds would be paid out to winning players. The State provided space in the state owned Slavija Hotel.

Fil-Sar lost its license, however, and sued the state for €9 million in damages. The court ruled against the company on the first trial, but it has appealed.

OCCRP and CINS reporters called both Tončev’s offices and Tončev himself for comment and left messages with staff and a driver but no one returned the calls.